Australia’s Gold Coast stretches along 57 kilometres (35 miles) of coastline and the region is home to over half a million people. Beyond the city’s beautiful beaches are vast, sub-tropical rainforests; large numbers of tourists travel to the region and their contribution to the city’s economy is significant. The Gold Coast Council, Australia’s second-largest city council has been monitoring the level of beach sand for many years. Indeed, the City of Gold Coast has been at the forefront of coastal management since the 1960s; the oldest Gold Coast measurement transects have been continuously surveyed for the past 60 years. In order to maintain the economic engine behind the growth of the Gold Coast region, management activities include dredging, sand bypassing, sand nourishment, and the construction of protection structures. The council’s extensive monitoring of beaches and of coastal patterns, and the data gathered over many years provides valuable information about coastal processes and their impact on the coastline. 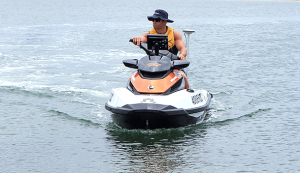 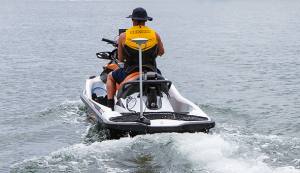 One survey method used by the Gold Coast council hydrographic section has changed little over this time. Leveling measurements are used to obtain surf zone bathymetry data to map the movement of sand, particularly before and after large tropical storms that have a potentially enormous impact on sand distribution. First, a 20m spaced grid is pegged out on the beach to guide the survey crew along their transects. Then, a swimmer with a level rod is dropped into the water from a jetski. The swimmer then uses the rod to identify the bottom along the transect and a surveyor on the shore with a total station measures the elevation of the rod. When one discrete measurement is recorded, the rod is moved to the next point along the transect. The method is time-consuming, laborious, and includes substantial disruption to the beach activities. Surfing in the survey area is affected, and the beach markers that are laid out are a nuisance. Overall, it takes the council 6 weeks to obtain their required measurements using this methodology. After learning about the prospect of using a JetSki with a single beam echo sounder to conduct these bathymetric surveys in a fraction of the time, the council purchased its first CEE JET™ hydrographic survey system from CEE HydroSystems, delivered in October 2015.

With a survey-grade CEESCOPE™ single beam echo sounder, RTK GNSS, on-board computer for data collection, and HYPACK® software, the CEE JET™ allows collection of high quality bathymetry data in the often substantial area of the surf zone. The CEE JET™ is a standard Sea-Doo personal watercraft (PWC), modified at the CEE HydroSystems factory with hidden internal cabling and custom equipment mounting brackets. As the CEESCOPE™ is a uniquely small form factor echo sounder that contains both the RTK GNSS receiver and the UHF radio modem for communication with the local RTK base station, it can be installed inside the small waterproof compartment available on the PWC. A high-grade waterproof display mounted on the handlebars and joystick mouse allows the surveyor to collect, view and manage bathymetry measurements along the pre-defined survey transect lines. With soundings collected at 20 Hz, the council will benefit from the ability to collect significantly more data on their surveys – and in a fraction of the time. The depth soundings are converted into an elevation above the survey datum by using RTK GNSS tide correction. The accurate GNSS antenna height is continuously recorded in HYPACK® and the sounding depths are automatically and instantaneously translated into bottom elevation, giving the Gold Coast Council a sonar-derived data set consistent with the previous surveys.