Barges and tow boats are used for transporting dry cargo along the Mississippi River system. From the lower Mississippi up the Ohio and Tennessee Rivers, goods such as grain, coal and soy beans travel to the gulf coast for export and steel and other products come into the US interior. Navigating barges along a flowing river is a difficult task! 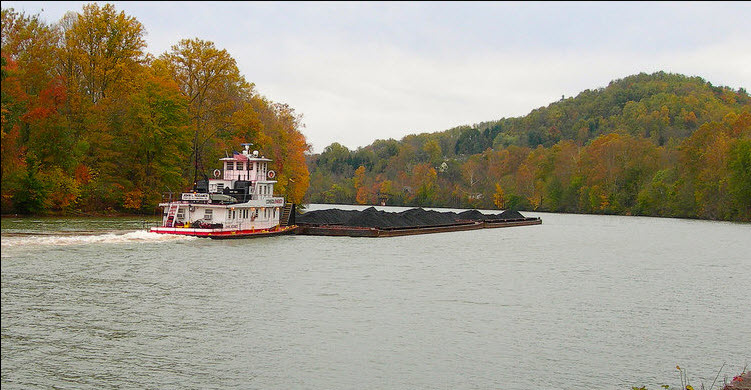 With Mississippi River surface velocities averaging 3 mph, increasing to 7-10mph during high flow events, river transportation requires highly skilled boat captains with accurate, up-to-date navigational information. Vessel groundings occur when available navigation data is inadequate; channel markers that delineate the navigable channel are not moved as the water level rises and falls, so at a low river stage part of the channel may have inadequate water depth for passage. Mississippi River wing dams funnel water flow creating dead spots where low velocities encourage sediment deposition, lock and dams may encourage sediment deposition below the dam, and sand bars may build up. To promote safer operations and reduce grounding incidents, one transportation company created a survey team to perform in-house hydrographic surveys of river reaches that are known to be problematic. As the river environment is dynamic, surveys need to be recent and relevant. Available published survey data loaded into the navigation system might sometimes be too old or of inadequate coverage on its own to prevent unknown hazards to vessels.

The initial survey setup used was a consumer grade echo sounder to show depths, with RosePoint ECS Navigation software connected to GPS to track the survey boat position. The channel boundary was simply marked at discrete positions with manual depth entries. The boundary was then sent to the vessel captains as supplementary navigation information to be displayed on their RosePoint S57-based display. However, the firm wanted to develop more detailed hydrographic surveys of the highest risk areas, to provide more accurate and useful navigation aids. Instead of roughly marking the channel edge, the goal was to be able to conduct a thorough hydrographic survey and generate an XYZ bathymetry surface using hydrographic mapping software that could be easily exported to RosePoint ECS and sent to captains as an overlay.

To provide a simple on-board setup suitable for operators without extensive hydrographic experience, the CEESCOPE echo sounder system with built-in Hemisphere Eclipse GNSS using Atlas L-Band corrections was selected. The “all in one” solution minimized the learning curve and offered the most accessible approach to professional quality survey results.

With the CEESCOPE using a network (Ethernet) output, interfacing with the RosePoint ECS software is straightforward – both depth and position data were routed to the software for general navigation and marking of features or channel boundaries. Simultaneously, professional Hydrographic acquisition software Eye4Software Hydromagic is used to show the survey line plan and manage the ongoing survey. With the real time bathymetric data visible in Hydromagic, surveyors can see the survey evolving in real time and with greatly improved detail, allowing full coverage to ensure potential hazards are more likely to be discovered.

Once the survey is completed, editing in Hydromagic allows generation of an equidistant-node bathymetric grid file (called a Matrix), using the NAD83 State Plane co-ordinate system. This might be a depth value every 10ft, 50ft, or 100ft depending on the resolution needed. The Matrix is simply a text file with the XY co-ordinates and an associated depth value (Z). This “XYZ” text file may be imported to RosePoint ECS, which translates the State Plane co-ordinates back to its native WGS-84 latitude / longitude geographical framework for positioning on the navigation chart background. After the upgrade to their hydrographic capabilities with the CEESCOPE and Hydromagic system, river vessel captains will have access to more detailed, trustworthy and up-to-date survey information.