HydroQuebec in Montreal, Canada manage a large network of dams around the province and the hydrology group are tasked with conducting surveys around the dams to better understand the flow conditions through hydraulic models. As is common for surveying around dams, access for manned boats with people on the water in the immediate vicinity of the dam is severely restricted. To gather the crucial bathymetric data needed, HydroQuebec turned to an unmanned solution which is able to complete the surveys in the hazardous areas close to the structures. HydroQuebec’s CEE-USV™ is fitted with a RTK GNSS built in to the on-board CEESCOPE-LITE™ echo sounder which is the brain of the vehicle. With a Trimble R10 UHF base station set up at the dam location communicating directly with the USV’s built-in UHF radio, real time precise position and elevation data are available to the Hydromagic acquisition software running on the shore tablet PC. Alternatively, Can-Net Virtual Reference Station (VRS) corrections may be used via the USV’s network.

The USV is able to safely traverse areas of high flow velocity – up to around 4m/s while performing the cross sections, and with two motors, differential thrust, and two rudders to call upon for directional control the vehicle offers the ability to collect data even in challenging conditions that are sometimes present in Quebec. The USV can even travel through each of the dam gates, allowing a more detailed profile of the bathymetry immediately next to the structure.

The sometimes very shallow, flat rock bottom presents a challenge for the echo sounding equipment as a result of the extremely high echo intensity. Not often used in typical survey environments, CEE’s SHALLOW echo sounder mode is useful to clean up the raw data from spurious echoes. 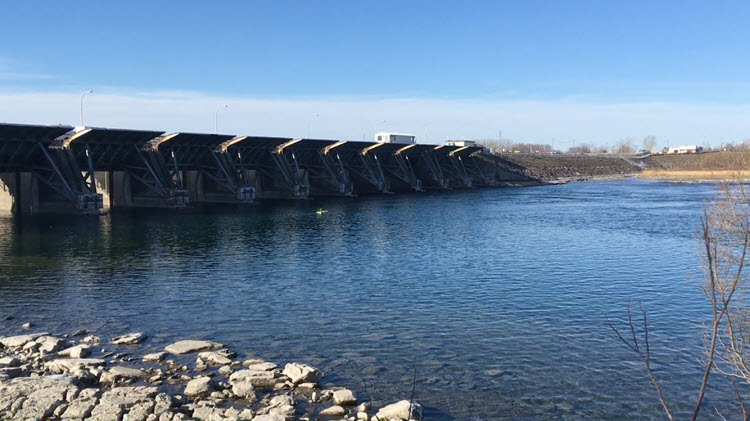